The benefits of these plans are listed to the right.

There are several downsides to purchasing a plan.

The first one, and perhaps the biggest, is that you are making a payment now for a service that will be used at some point in the future.  What guarantees do you have that the money will be available when needed?  Could you end up paying twice for your funeral?

They give peace of mind to both the person whose funeral is covered, and also to their family.

In certain circumstances there are financial benefits to purchasing a plan as well.

However, not all plans offer the same benefits and guarantees, and care is therefore required in selecting which scheme provider to use. 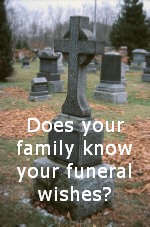